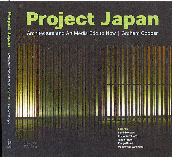 The forum was held Wednesday 22 April 2009 to coincide with the launch of Project Japan at the Embassy of Japan, London and was followed by a reception for forty guests .

Over the past 150 years art and architectural design have made an important contribution to mutual understanding between the UK and Japan. Learning from current architectural practice in Japan, this forum will reflect on recent shared relationships across national borders in the context of increasing globalisation. Playing an active part in this inter-cultural phenomenon, the speakers Ken Tani, Takero Shimazaki and Graham Cooper will explore the influence of Japan on their own experiences in the fields of architecture and art, and how it has informed the thinking behind their work.

Ken Tani spent his childhood in Kyoto, and more recently has gone back to work for Tadao Ando in Osaka. Today he works in Cambridge as an architect, and in his free time travels with a French NGO to Asian countries to give free advice in urban planning. At the forum, he will give a presentation on why living and working in Japan has influenced him as an architect.

Takero Shimazaki has lived in the UK since 1985, founding Toh Shimazaki Architecture with Yuli Toh in 1997 after working for the Richard Rogers Partnership in London and Itsuko Hasegawa Atelier in Tokyo. Toh Shimazaki Architecture is known for its sensitive and subtle approach to the surrounding context for which its buildings are designed. This has been influenced strongly by the way both historical and contemporary Japanese design relate to nature and the urban context.

Graham Cooper is an art practitioner and protagonist with a special interest in Japan. He launches his new book Project Japan Architecture and Art Media, Edo to Now. He will briefly describe the work of his “guest contributors” architects Fumihiko Maki, Kisho Kurokawa, Tadao Ando, Makoto Sei Watanabe and Kengo Kuma and his own contribution to introducing the work of the Japanese artist and architects to the UK.